THE PALASASSI SPORT HALL: THE GOLDEN YEARS OF MY ASOLESCENCE

I started playing basketball, having fun and a lot of it, but I also felt resentment due to the fact that I didn’t play football. My parents didn’t want me to play football because they claimed that basketball was for growth and education, the exact opposite of football. I have reproached this decision for too many years … it is time to thank them. I felt unique a mixture of emotions about basketball –  anger, happiness and passion, which I could never feel for any other sport.

So we arrive at the Palasassi sports hall, at the age of 12, when the most exhilarating basketball game of my young career arrived. After having spent the previous years around school gyms, small country pitches and the old Lanera building, the decisive challenge came when there were the Play-offs against Bernalda, to decide the winner of the regional championship.

I had been dreaming of that game forever. I went on Sunday to see my idols play basketball. I remember everything about that match, the smell of the parquet, the swooshing of the hoops at each basket that was made …

From that day on, we played every game of the championship at home, at the Palasassi and finally, at the age of 15, we raised the cup, our first championship!  Every time I go back there, I can still hear the heat of the audience, the coach’s screams and the faces of my teammates even when the place is empty. I left a piece of my heart at the Palasassi.

It was definitely the worst year of my life, from a sports standpoint.

As I told you before, I left basketball for a year. I decided to try to realize my dream of playing football. When I was 16 I finally had the chance to decide for myself, without my parents influencing my choice at all.

I left basketball at the height of my young basketball career and it is the biggest regret I have in 18 years of life. Rewinding the tape, a few months before starting my football adventure, we had won our first regional championship by beating the dreaded Power in the final. It took several years of defeats and revenge to finally beat that team. Then I thought, if I win that game I’ll leave. Because I wasn’t feeling motivated or having much fun anymore in basketball, I decided to try what I erroneously thought my “real passion” was. I did some research and my attention fell on the Matheola football club.

However, my experience didn’t last more than a few months, as the reality hit me that I was playing a sport that was the exact opposite of basketball, where ignorance, falsity and being “recommended” reigned.

I felt terribly out of place for the first time in my life. I had spoken badly about the football world, but until I had actually experienced it first hand, I simply couldn’t understand … I went from the authentic, happy and familiar world of basketball and crashed into an world that was its polar opposite –  the one  of football. Thus, I didn’t last more than few months… 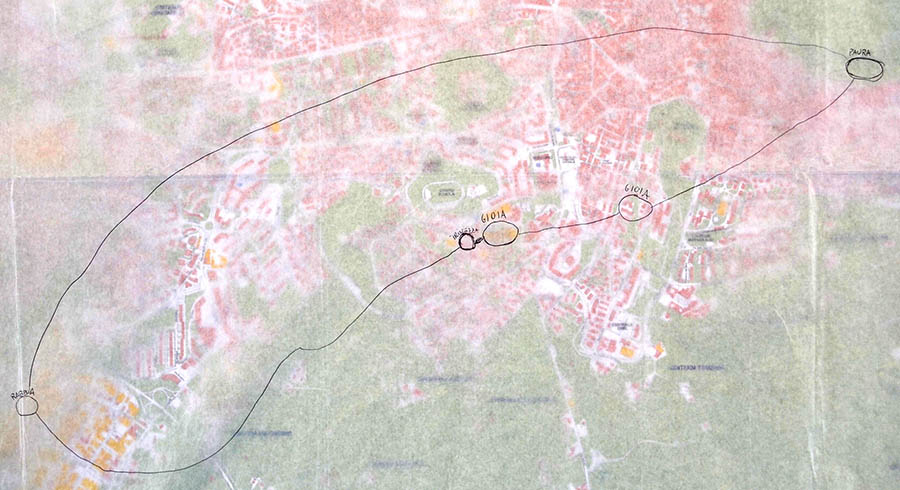 THE GRAVINA (canyon): A LEAP INTO THE VOID

I’ve risked my life several times, a bit because I love taking risks and a bit because the lightheartedness of this age makes you put your impulses before reason. This was the case that afternoon on the 11th of July.  I was just seventeen and Dodo, my partner in crime, was about to turn eighteen in a month’s time … I use the conditional because on that hot summer afternoon, the canyon went from being a place to explore on a peaceful excursion – to a battle between life and death for us.

In short, my friend and I decided to go hiking in the canyon that fateful afternoon around 18.00… After scouring the area near the Grotta dei Pipistrelli (the cave of bats), we decided that our adventure needed to be longer and more exciting … We initially took a path that immediately proved to be unchartered, but we decided to continue the descent anyway. At a certain point, as the sun went down and due to the extreme slope of the rock, it became a real experience in climbing.

Dodo, the biggest, but equally unaware of our situation, went first … He lost his grip and fell from a height of about 4 meters, rolling down the canyon until his body crashed into a tree, preventing him from rolling any further … I reached my friend who was visibly in trouble as soon as possible, jumping 2 meters and landing on a non-existent support that caused a micro-fracture of my ankle …

In our panic, we didn’t immediately call for help, but went down into the stream until we saw a rock. We climbed on it after having swum in what was more like a landfill than a stream …

Those were really dark and cold hours down there, but we managed to call the rescue team, which arrived after a couple of hours. Dodo was icy and visibly sore, our parents were waiting for us at the top … I will always remember that experience and especially that place, with great fear when I think about what could have happened, but luckily didn’t… However, that place matured me and now I understand that, I need to use reason before following my impulses.