OF BEES AND WHALES.

It all started with the packaging of a blue box for which I drew the 4 key logos: Time, Memory, Emotion, and the Souls of places.

Images that refer to real fragments of Matera’s landscape, even if slightly transformed. That box was the kit for my students’ first “treasure hunt”, who would receive it in the mail with an invitation to participate in the project.

However, it was also a treasure chest to keep the emotional maps of those 400 inhabitants of Matera who had drafted their own cartographic memory in the first phase of the project.

Because Matera’s Atlas of Emotions, (seed of the most ambitious of the entire Cities’ Emotional Atlases), arises from the contribution of two different fundamental cartographic inclinations. There are maps drawn up by the sedentary, that is, by those who live or have lived in this city (time travelers in this case, because their lives adhere to and overlap with that of Matera); maps of this type are in fact layers of memories.


And then there are the non-locals, or space travelers. What is it that strikes and excites people (and with what intensity) who may be seeing and discovering Matera for the first time, spending just a week here? For them, Matera is not a family city, worn out by old habits, but a new place of exotic wonders.

My “apiaries” –  this is the name I gave to the three summer workshops in which I guided more than thirty artists –  are the synthesis of these two journeys in time and space. Working side by side, visitors met residents and residents married visitors. The works exhibited in the Secretissima Camera de lo Core were born out of these encounters.

I chose to give an account of my contribution to the Teatro dei Sassi project by directly quoting the pages of my Facebook Diary, written immediately after my stay in Matera. The concurrent and impromptu nature of these short writings seems to me to convey a little bit of the warmth of that exciting experience.

June 2018
Un-workshops (commercial nuances), un-internships (neutral), not even seminars (which I like more than others because of the seeds they plant, but they also evoke stale and rigorous seclusion). Perhaps this first meeting of map-makers, under the auspices of the Teatro dei Sassi and of Matera European Capital of Culture, is above all an apiary. Like zealous bees, we plunder amazing flowers and we bring beauty to the common hive. We do not work for just any advantage, but we work to prolong the grace of an agreement, where everyone takes pleasure in the work of others … Because the real reward of this collaboration is actually a CONCERT. Thank you for today, dear, tender cartographers…

July and August 2018
Last night I dreamt that in the fabric of the world, (which was also a city and a house), there was a void. An area the size of a small square was missing and if you looked out over the edges of this void your gaze fell into nothingness. Then I asked friends to help me repair the opening and to do this, we used a nice strong piece of cardboard, gluing several layers together. Small groups were formed, and each created its own piece with small side slots in order to sew them together. The nice thing was that they all adorned their cardboard with drawings, writings and symbols that helped to identify, not the individual authors, but their affinities – something like a brand representing a certain “spiritual family”. Then I sewed the pieces together and tested their resistance. Not only did it hold my weight, but also that of all the participants. In the end, there were hundreds – who started dancing and celebrating. When I woke up I realized that I had simply reworked – in dream form – the experience of our laboratories in Matera. Care-taking of the works and building of the “Secretissima”

November 2018
To the question of the interviewer about what I did in Matera over these last ten days in November, I replied that I took care of  the works created in the summer apiaries. “To take care of” are unusual words, in my personal lexicon, outside the context to which they are usually reserved: I take care of my parrot or cat; I took care of my children and my sick mother. Yet, in the infinitesimal moment in which you mentally discard or choose a word in order to find the right one, I realized that I was really taking care of. I was not preparing, not setting up, not completing, not embellishing … The tone of affectionate concern predominated. I took care of an exhibition.

I abhor the noun “curate”, which is icy and technicalizing, so much so, that the “care” of an exhibition today resembles a clinical practice. Unless we go back to the fantastic medieval etymology (denied by the current, prosaic linguistic): cure by “quia cor urat”: because it warms the heart. Take care of, as in to look after, that’s it. Like with the artists who created with me this summer. Heat and be heated. Carefully. And so it has been over these last ten days, working side by side with Paolo, Marco and the boys/girls, with Massimo, Luciana, Mariangela, Lele and Nina. The photographs you see tell something of the moments of grace that we experienced at the Fabbrica del Carro Trionfale, (the skeleton of the float in the background!) or in the Library, (where a bamboo forest flew from the street to the fourth floor). Thanks to our friends from Matera who came to spy on us and to help us. And while we’re at it, thanks also for the celestial presence of Morgana the mantis and that loving dog – Drugo. 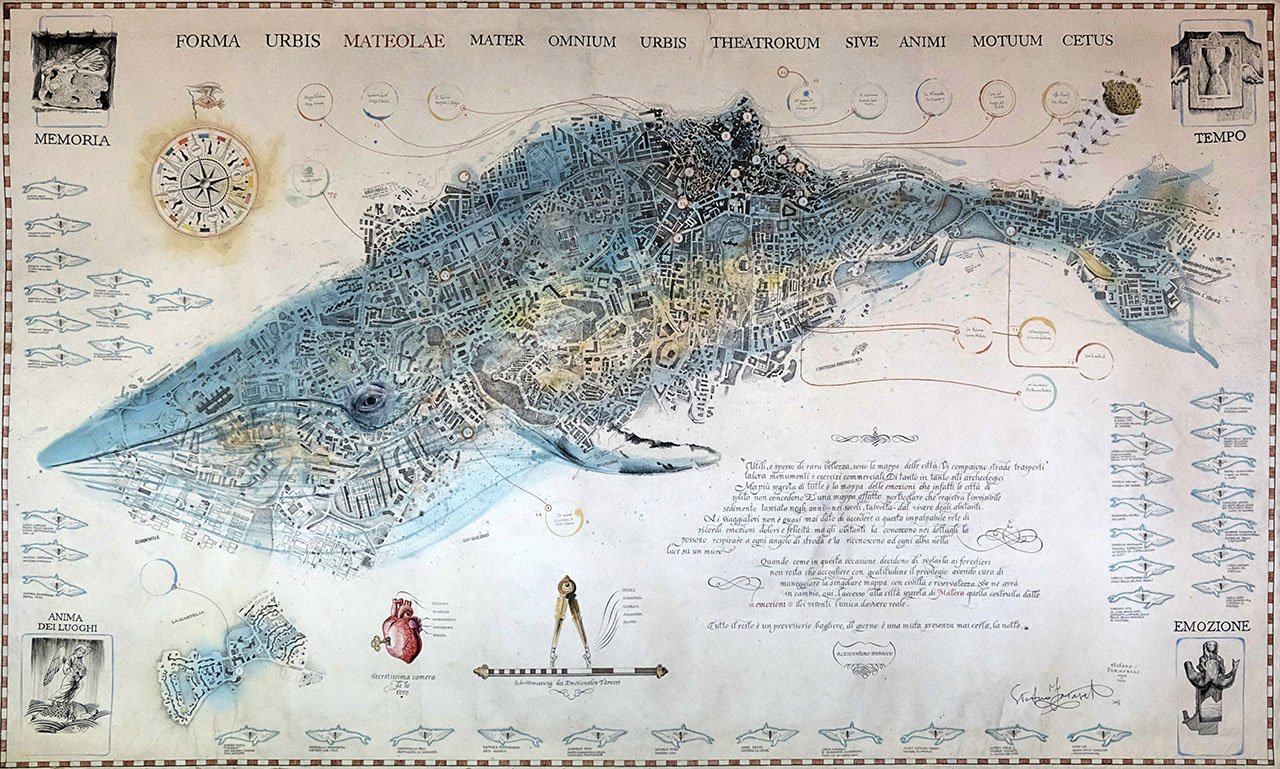 Then a Mother Map was commissioned. In a corner of the study, I had rolled up a huge sheet of rice paper (three meters by two), brought from a long journey in Laos. I immediately knew that this would be the support. Almost simultaneously, I understood that the large map would have been whale-shaped. Because there were several daughter maps, an extremely large uterus in whose warmth to place them all was needed.

The Mother map is a map that contains all the others: it is a synthesis of emotional geographies, (emotive more than emotional), of places that have been loved or hated, of lives and deaths, of scents and tastes, of lights and shadows.

It is also a summary of all the geographies that the artists who participated in my apiaries wanted to give to Matera.

Over the course of the days that I was commissioned to make the Mother Map, Alessandro Baricco (whom I had not seen since University) was invited to collaborate on the great Atlas of Emotions. He accepted, provided that his speech would be the inscription on the map. And here it is.

In those same days that I had been commissioned, dancer Heike Hennig also agreed to interpret the Atlas. The whale swallowed her too, as well as all those who, in one way or another, have contributed to setting up the Secretissima camera de lo core, where the Mother Map looks like a sail swollen in the wind of wonder.