RIONE S. GIACOMO (VIA B. CROCE)

We were an army! An entire generation divided into three age groups. It was 1969 and a few months later, the legendary 70s would begin. We populated a neighborhood on the outskirts, way on the outskirts of the city, located to the north –  the S. Giacomo district. After it and around it, nothingness. We were the undisputed masters of an entire part of the city. Our borders had a hint of supremacy … ..to the east it spread out like a large stain with dark and intense colors, a huge private almond. The neighborhood was surrounded by a wall that, however, did not prevent us from climbing over it and jumping like monkeys onto the trees and coming back, our feet thudding dully as we walked with loads of almonds held within the pouches we made from folding our shirts onto our bellies. Once on the other side of the wall, we would settle ourselves down, far from prying eyes, and with large stones we would break open the green velvety shells of the nuts that had a defiant taste. Beyond the almond grove, in the middle of an uncultivated meadow, stood an abandoned cottage, looking gloomy and fairytale-like at the same time. It was another attraction for all of us and it was another test of courage because we had to see how close we could get to look through the windows at that intimate space inside, that seemed to have been left there all of a sudden. For us it was always a haunted house … .. we lived that moment without great expectations and we dreamed with ease.

I remember those lighthearted years with a lot of joy. My shyness was now limited to just a few situations, but I was learning to manage it and above all, to overcome it. I really liked training and competing. The sports field was a place of friendship for me more than sport. It was enough for me to spend my afternoons “on the field”, as we kids used to say and to have known that I had spent my time well and also with good friends. 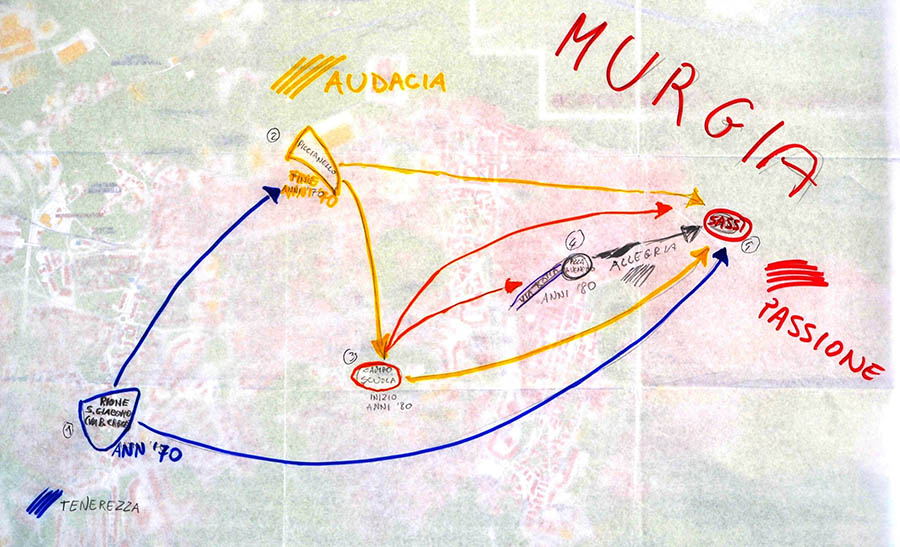 By the beginning of the 1980s. I remember that there was an age when you stopped playing in your neighborhood on the street and you moved downtown, arriving by bus, giving way to one’s “social initiation”, around 16 years of age. When that moment arrived, we changed our facial expressions, the way we spoke and posed… and even the way we looked. I remember having witnessed so many change their focus of interest, including my older sisters, but when my turn came, I was not at all anxiously awaiting  what I knew could never make me happier than what I had already known in the simplicity of childhood. However, I remember my walks along Roma street and those first glances of guys who were interested in me. Those were my first real, but embarrassing courtships, the first sentimental declarations. The square, however, was accessible to cars and nobody could imagine that there was an underground city that would emerge in the following years. That part of the city was the center where the simple life for us teens took place.