home! Rione Città 2000, really close to the neighborhood of San Giacomo, at the tip of Matera. Way far from the city center and thanks to that, life flowed in a rather quiet and gloomy manner, at least until it was designated as a place for the local street-market on Saturday mornings. But as a child, this place offered endless opportunities for fun, as well as lots of other kids to play and make friends with. In fact, it is here that the first “La Bur’nett”, or the Festa della Bruna for children, was held. Long after Matera’s patron saint Festival on the 2nd of July had passed,  the residual excitement was still alive and felt especially by many of the kids in our neighborhood, leading to the “La Bur’nett” festival.

More opportunities for fun also abounded from the multitude of green spaces with fresh cut grass on which to play. First you had to help the “the adults” clean the gardens before earning the chance to play. Unfortunately, all this has disappeared today because of the crazy construction and development that’s been going on, which has reached the point of destroying trees and losing all the green areas, almost 90%. Yesterday’s green landscapes have now been replaced by asphalt.

His is another place where I used to play, although never venturing too deep into the forest, for fear of crevasses and undesirable people (at least from what our parents had warned us against). In reality, we didn’t bother to play there too much because the pine forest was rather gloomy. Being in contact with nature was what  the children and parents of Matera were proud of.

This was not just where the parade of the Triumphal Float for the town’s patron saint festival begins on the evening of the 2nd of July, but it was also a meeting place for kids and teenagers. Also, this is where the famous Arcobaleno toy shop is, where kids can take part in various competitions and games.

Here we are still in the district of Piccianello, which is the focul point for all lovers of the festa della Maria SS. Della Bruna (our patron saint festival), and where, over the course of several months, the Triumphal float is gradually created and decorated by Materan artisans, one of my ambitions.

This is “The Center”, not only from a geographical and a social point of view, but here is where all the action takes place in Matera. Here is where all of our emotions add up. 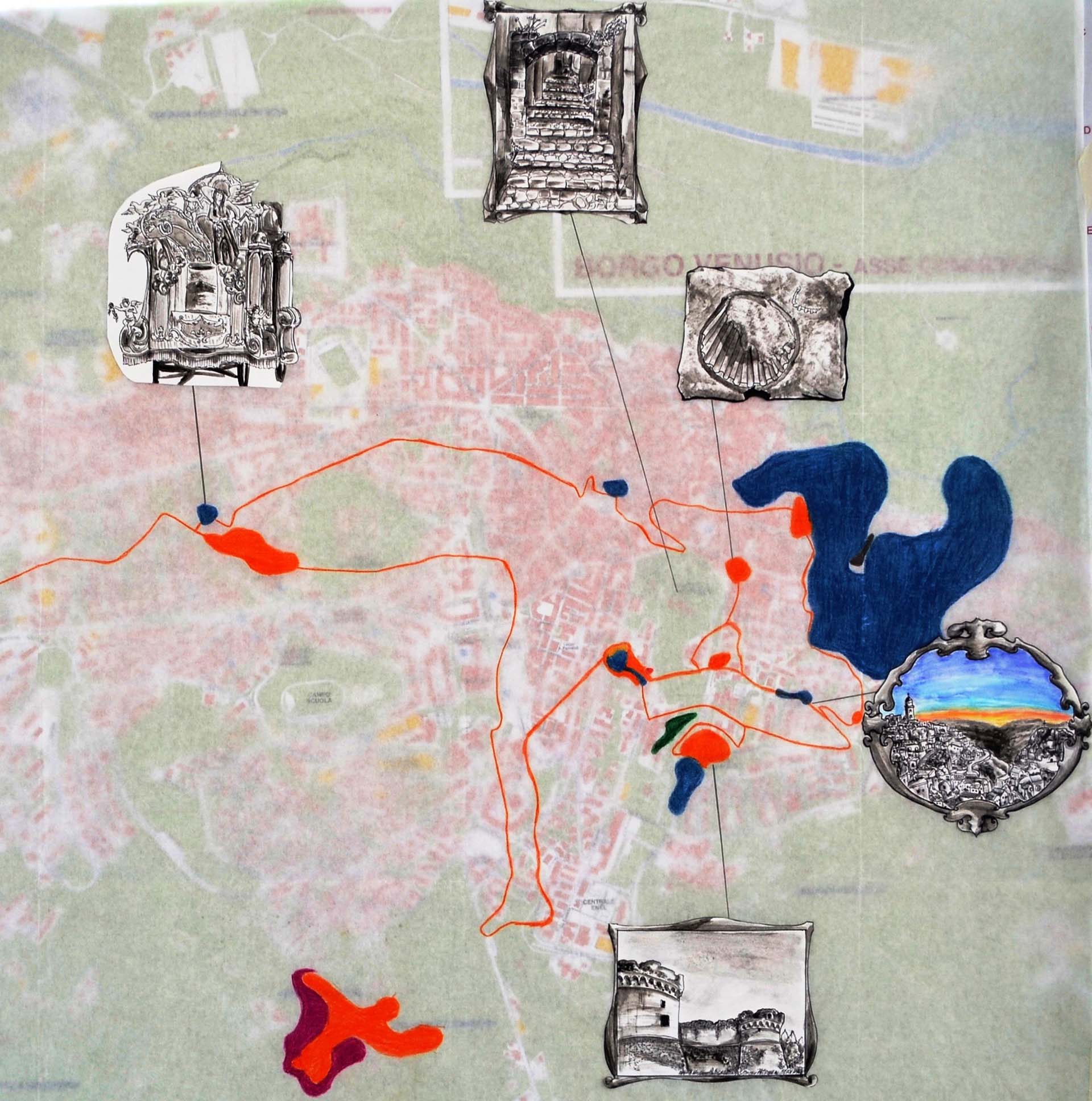 Having undergone several renovations over the years, with catacombs below (once part of the old underground city and still under restoration), the square has evolved over the years into a nice meeting place  for diverse activities and socialization. Various events, such as concerts and shows are organized here. This is also the starting point for the Shepherds Procession at dawn on the 2nd of July.

Known as “the usual place” because this is where people go to sit under the shadow of the Cathedral of Maria SS. della Bruna, (which represents the “cusp” of the Sassi of Matera), every evening. The wall through which the street that leads into Piazza Duomo passes, is built with blocks of tuft, with fossils embedded within the rock as evidence of the rock’s marine origin . The largest is a shell that seems almost as if it were carved into the block of stone.

Over the years it has become the center of the maternal nightlife along with Via Ridola. Not only pizzerias and bars, this short section of the city of Matera has a multitude of places of interest, from the arch of votive shrines, recently restored, the particular church of Purgatorio, the Ridola museum and the Lanfranchi Palace, center of various activities, with the geometrically satisfying “Goccia” of the Japanese sculptor Azuma close to him. But the jewel of the Piazzetta Pascoli is the ‘belvedere’ where you can enjoy the Sassi in their best perspective and in the morning enjoy a magnificent and gentle sunrise.

the most difficult road of the entire bike route that I do every week to the city, where I embrace the places that are closest to my heart of Matera.

Once a really popular place in the past, the park has decayed, even if there have been attempts to resuscitate it through the occasional event. Although not very busy, there is no real peace and quiet here, due to the constant flow of people passing through, using it as a shortcut and due to the highly trafficked road just below.

In front of the Tramontano Castle, the park is often used for concerts and fireworks displays (such as the fantastic and unique fireworks display for our patron saint festival, the Festa della Bruna and Festa di Sant’Eustachio). It is also possible to see the bell tower of the Cathedral from here.

The area behind the Tramontano Castle offers wonderful peace and quiet and is full of gardens and areas to sit in contact with nature and offers a close-up view of the castle. In the evening you can watch spectacular sunsets and on summer nights you can see the delicate and precious light given off by swarms of fireflies. This place has become one of my favorites in Matera.