I was born in a dark cave in the Vetere district, where I lived until I was six. The Church of “Madonna delle Virtù” was in front of our house and completely blocked the only light that came in through the front door with its great majesty. The cave-house where we lived had a stable at the back, where we kept a mare, a mule and a goat. There were other caves at the back of the house, which no one had ever entered nor knew where they went.  This was the mysterious part of our house, that aroused anguish filled fantasies. We were hardly ever at home, doing most of our day to day living in the little neighborhood of my maternal grandmother, who lived in a house with lots of sunlight and a balcony overlooking a beautiful view. The eve of the Epiphany was a nightmare: we had to sleep with the covers over our heads, because if we didn’t close our eyes and go to sleep the Cucibocca would come and sew our mouths shut. I spent the entire night awake, curiously tempted to peek my head out to see the Befana (the witch of the Epiphany) despite my fear of the Cucibocca. I have very few memories of my childhood and those memories are pretty sad.

At the beginning of Via D’Addozio, before the Church of Sant’Agostino, there was the house of my maternal grandmother: the house of smells, of freedom and of affection. A half-wall and a red and blue striped curtain, woven by my grandmother, divided the one room cave-house into two spaces: a living room and a large bed in front and a kitchen with two big beds for the older uncles and wood kept behind them. In one corner another curtain hid the cylindrical night chamber-pot (u quondr). I can still smell the scent of my grandmother’s meat sauce with chops, as well as the smell of the crown of garlic on the bed to chase away the worms (as she said). On the balcony outside, from which you could see several houses (once municipal granaries), we ran, played and climbed on chairs in secret to see what was happening in the neighborhood below.

Serra Venerdì was the first district built after the law on the “Rehabilitation of the Sassi district” of 1952 was instituted. Because there were five of us living in a hovel in the Sassi, we were the first to get a house in that neighborhood in 1956.  After just a few days, on the 31st of May, my brother Pasquale was born and was the first child to be born in Serra Venerdì. We had just moved in and already the house was small, because the family had grown. It was, however, a real home, where sunlight came in through the windows, water was within arm’s reach and there was also a small garden. I was even allowed to play with the boys, our next-door neighbors, out in the open air. We played hopscotch, market and games about discovering how different our bodies were. I always pretended to be a teacher and a teacher is what I became. 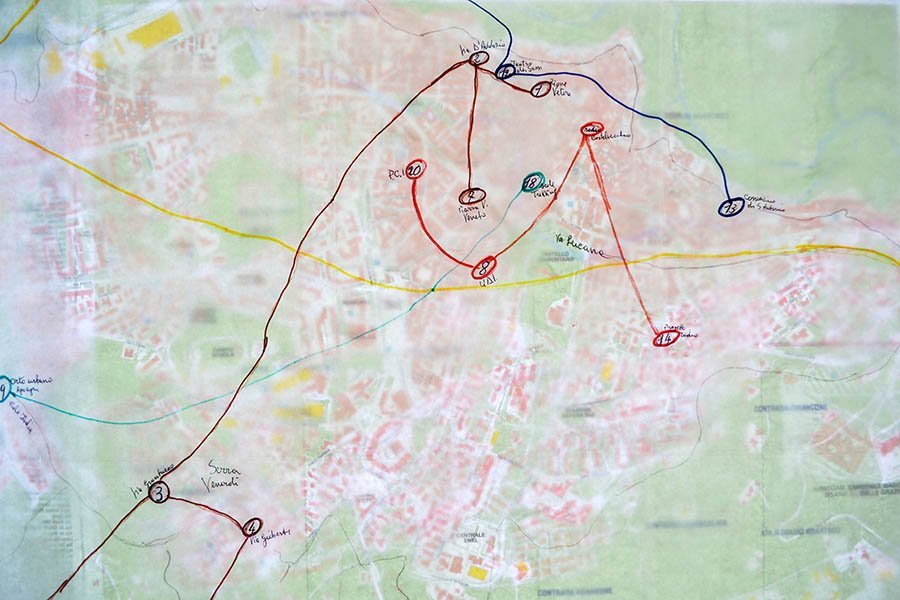 On Via M.R.Greco there is the elementary school where I taught for 22 years, both as a substitute and  salaried teacher.

In 1975 I was a substitute for the first grade. In front of the school, where there is now the Evangelical church that gives onto Via S.Pardo, there was a gypsy camp that could be seen from the windows of my classroom. It was difficult to get the children to concentrate because they were so curious about the gypsies. One day, I decided to open the windows wide and invited them to observe what was happening. I wanted to use their observations as the basis for a writing and drawing exercise. Suddenly, the director and the inspector doing rounds of the classrooms. I wanted to sink down and hide. All the children stood facing the windows, some even standing on benches in order to see better, commenting on what they saw.

In vain, they were invited to immediately sit down and be quiet. I tried to explain the reason for the children’s behavior and chatter, but I was reprimanded and urged to be more authoritarian and to keep the class more in order.

The Timone Moors was where I made discoveries about the rock churches, geology, anthropology and the natural history of Matera together with the Lega Ambiente and the C.E.A. (Center for Environmental Education).

As head of the Lega Ambiente school sector, I collaborated in the creation of environmental education projects. The first people I got involved were my third and fourth grade classes and with time, the classes for all four years.

The seat of the P.C.I. (Italian Communist Party) was in Piazza Cesare Firrao and I was a militant.

The PCI was a training school for me. it made me consciously aware of the injustices, abuses and inequalities of this society, idealizing (wrongly), Communist regimes.

I got to meet a good part of the management team: Berlinguer, Amendola, Reichlin, Napolitano, Cossutta, Ingrao, Carlo Levi, Occhetto.

I was a candidate and was elected to the city council of Matera in 1980. I was the first Communist woman together with a woman from the Christian Democrats and another from the Socialist movement. I will never forget the open and hidden discussions within the PCI, especially amongst the elderly, who did not support my candidacy, because I was a woman living with a divorced companion with children. The people of Matera, with solid traditions, would not have voted for me they said. However, being supported by the women of the UDI, the feminist movement and the Serra Venerdì neighborhood where I had lived, I was elected with full votes and it was a great satisfaction.  In these circumstances, the backwards, sexist prejudices and negative aspects of peasant culture, were brought out into the open, despite the fact that PCI was the most open party regarding women’s emancipation.